The Story of Buddy Hart 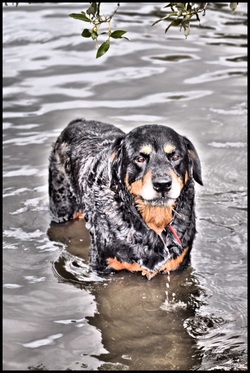 His birth name and the home he spent the first few years of his life are unknown. If the condition he was in when he found his new family, has anything to do with it - he was badly abused and so ran away.

In fact, if Buddy ran away to find a new family who would treat him well -  his mission was successful. Dave Hart and his son, Caylim, were shopping at a supermarket at Upper Coomera.

A bedraggled, beaten, bloodied and bruised dog approached Caylim while groceries were being loaded into the car. One thing you must know about Buddy is that he is big. He is part Rottweiller and if the size of his head is anything to go by - part bear.

Dave had significant experience working with guard dogs and dealing with the bigger species. He was a compassionate soul and saw the goodness in Buddy's eyes. His heart went out to him, he decided right there to give Buddy a home.

First came extensive treatment in the AWL veterinary clinic. Buddy had heartworm and had cuts and lumps all over him.

Once on the mend, Dave took Buddy to work with him everyday. He got to know him and Buddy got to know Dave.

It has now been 6 years since Buddy found the Harts. He is still the most delightful, caring and loving dog. People hold grudges, people blame past traumas for unacceptable behaviours. Dogs don't, dogs know that life is about looking forward - not back. If only more humans could be like dogs, the world would be a better place.

Get Up and Go

Thanks to Lara Robinson, _Buddy is trialling a fantastic new product called Get Up And Go - an all natural revitalising superfood for older dogs which helps with mobility and flexibility. Because it is natural there are no hidden nasties that can cause damage. Even better, it's Australian formulated AND made!! We will be following his progress avidly over the next couple of months and keep you posted.

Writes Lara: Buddy has definitely got more spring in his step. Previously when standing he looked like an old man climbing out of a deep seated recliner. Buddy has  become more agile and on the weekend jumped about like a kangaroo when I told him and Zoey they were going to the park. 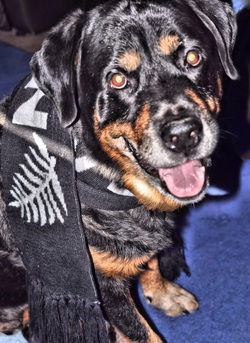 _It's that time of year again ... it's rugby season. Mom and dad watch all the games and dad makes a big noise shouting at the refs.  Dad is an All Black supporter and so am I. Mom, well there's no hope for her - she is a Springbok supporter. Here is an update on the trial I am on:  It is getting easier for me to get up and down. Mom thinks it's the magic pills Vanessa gave her to try. I think it's because of the delicious raw food diet I am  now on thanks to advice from Ruff Diamonds. My movement has definitely become more fluid. I don't wobble as much when I get up, it feels easier to move. Here is a photo of me wearing my All Black supporter scarf. I love to watch the Hurricanes play and I am also a big fan of the Crusaders. Yep, I do so love this time of year.

_What Buddy Hart says: "My human-bro Kaden  has been giving me my Get Up and Go every morning and evening. He keeps telling everyone how smart I am because I eat them as they are - without needing food as a disguise. They taste good, that's why I gobble them down. And I am smart ... it's the humans who are not evolved enough to understand 'bark'. I think that if humans sniffed each others bums the world would be a better place. On the subject of bums - my mum always joked that I had a big one. Well, the joke is on her because it is trimming down nicely. I am able to get about easier and when you live in a house with lots of stairs that is a very good thing indeed."  Lara says: As Buddy writes, it is easier for him to move about - particulary up and down our stairs which lead to the garden. He used to wobble from side to side and take it slow. He is alot more agile and easy with movement. The fact he eats the tablets as is, makes me very happy. It is so easy to give him his doses and this suprises me because I have only ever battled to get dogs to take medication. This is a first and makes it a winner on that alone.

Buddy Hart says: "The weather has been so nice that Zoey - my annoying little sister (she's adopted) - and I have pestered mom to take us for walks every day. Two nights ago Zoey pulled her lead off the wall downstairs and brought it into the lounge. Everyone thought it was cute and we both got a walk. I wish II had the energy she does. I know I feel less stiff, that's for sure. Four days ago mum took us to the park and I jumped into the back seat - I used to need my bum pushed in before. When we got to the park I jumped into the driver's seat and out the door before mum had time to open the back doors. She was amazed and I think Zoey was a little jealous because I got out the car before she did."

Buddy Hart says: "I have been taking my magic pills for so long I am able to predict when my human brother will give them to me. I see him go to the benchtop and then as soon as I hear the bottle rattle I waddle over and eat them all in one big sloppy crunch. The pills are still easing my stiffness and it is still alot easier for me to get up and down the stairs. It's making a difference each day and that makes me and mum happy."
Lara says: "There is no doubt the tablets continue to assist Buddy with stiffness. Their effect seems to have plateaued, but this could also be due to colder weather. I am a big fan of Get Up and Go as I have seen them work. It will be interesting to watch this as the weather gets colder."

Lara says: "It is often difficult to tell how a dog is feeling. Those tuned into their pets' energy are able to sense if their pooch is happy or sad. Buddy can't talk - obviously - but I have seen a quickening of gait and more enthusiasm to bark at birds while sitting on our balcony. I take Buddy and Zoey to a dog park a few times a week. A few weeks into his Up and Go he was jumping from back seat to the driver's in a split second in order to get to the park first. When it came to going home, however, he needed a push on the bum to sit on the seat. This past week he has been jumping into the back seat after the dog park exercise. He is not able to talk but these things make it clear that the tablets are working."
Buddy says:  "I like the dog park but some of the little dogs there are very annoying. Last week a beagle constantly tried to hump me. He was a boy like me and that was just plain weird. Everywhere I went this little odd ball followed and just wouldn't leave me alone. Eventually I got annoyed and gave him a growl. I think the magic pills are making me irresistible. Maybe mom should try some."

Buddy says:  "It is my favourite time of year - cool days, clear skies and rugby. The dog park is one of my favourite places to visit but sometimes I meet dogs who are not as friendly as I am. Last week a staffie latched on to my ear. It hurt and surprised me because I had just spent 10 minutes catching a ball and swimming with him. Before magic pills I would lie under a tree with mum and watch my sister Zoey play with the other dogs. I don't just sit around anymore - I am up and running about - playing and having fun. I could have bitten the nasty dog back but I am old enough to know better. I have regained the ability to run fast and could have given a powerful bite back. Instead thanks to age and wisdom I walked away shaking my head thinking 'youth is wasted on the young, regardless of species'."